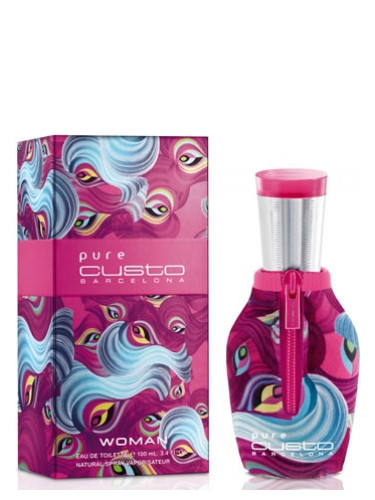 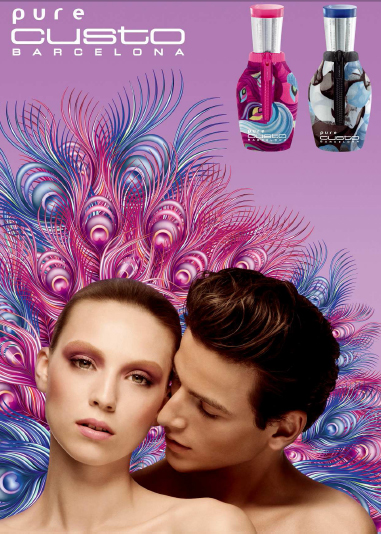 Two new fragrances, one feminine and one masculine, that follow in the groundbreaking footsteps of Custo’s first fragrance. Daring and original, they express Pure Fashion, they contain Pure Innovation.

The magic of Custo Barcelona transformed into a new life-giving elixir: the new fragrances for man and woman by Pure Custo Barcelona. ≈With the fragrance I wanted to go back to the beginning, remembering what we were looking or when we launched the brand: Freshness and creative freedom to do something new, different, something that didn’t exist on the market”

This is what Custo Dalmau says about the new challenge. Freedom and freshness are part of the purest concept of Custo Barcelona. The two principles underpinned the originality of the project and are the catalysts of the brand’s development since its inception. Pure means the essence and also gives its name to the clothing range that is most intrinsically linked to the concept of Custo Barcelona.

A pure spirit for two fragrances, one feminine and one masculine, which share the same concept. They express Pure Fashion They contain Pure Innovation To symbolise the very essence of the brand and the new perfume, the ad campaign accompanying the launch takes an element borrowed from the symbolism of Custo Barcelona: The peacock.

Often used in the prints, the peacock is admired for its colourful feathers and the images these create when it unfurls its tail, as well as surprising us with the particular texture of its feathers. It is also the perfect representation of the first principle of perfumery – seduction – because this proud bird uses the incredible display of its feathers to attract attention during its courtship ritual.

The female version of the fragrance is bright, bold and addictive. Its vocation, like the peacock, is to seduce.

Its top note is fresh and free, just like the fashion of Custo Barcelona was at the beginning of its adventure. Mediterranean bergamot and lemon blend their citric notes with the warm and exotic seduction of ginger. The green notes of sage underscore femininity while providing an aura of freshness.

The middle note is full of personality, with a contrast between the floral blend of intriguing violet and the exotic notes provided by fruits, pepper and the modern Super Hedione.

The bottom note reveals sensuality and feminine appeal thanks to the contrast of fragrant wood notes with intense musk and the sweetness of vanilla.

The bottle and the box. The two new fragrances are presented in an original context by Custo Dalmau. A printed neoprene case, in pink for girls and blue tones for boys, covers the glass of the bottle and is closed with a zip that recalls the wetsuits used by surfers to combat the cold ocean waters. The cases add a surprising touch that marks everything that this daring creator does: cutting-edge fabric and the idea of dressing up the bottle of a fragrance.

The box, vertical and rectangular, enhances the graphical power of the prints chosen to dress the bottle. Psychedelic pink and silver images with touches of colour in the feminine version of the fragrance, and a jungle of overlapping leaves in blue, silver and black for the masculine version. In both cases, the finish is metallic and bright, vibrant with flashes of silver. Pure Custo Barcelona Woman was launched in 2010.